Ban on Straws Sucks. Or Does it?

Home/blog/Ban on Straws Sucks. Or Does it?
Previous Next

Ban on Straws Sucks. Or Does it?

Does the Ban on Straws Really Suck? The world is now struggling to rid the world of Plastic Straws and its plastic pollution hangover. We Have the Solution.

Corporations, municipalities, and national government entities are proposing and implementing bans on plastic straws. The world is struggling over this. We can’t be without straws!

At the beginning of July 2018, Seattle became the largest U.S. city to ban plastic straws. On January 1st 2019 Washington DC banned them too. Those aren’t the only places. By 2020 Starbucks, McDonald’s,  Alaska Air, are among companies that are phasing plastic straws out. Groups globally are responding to public outcry demanding action against a product that, is harming the world’s oceans and grounds.

Try to wrap your head around this static, in the U.S. alone, it is estimated that 500 million straws are used every single day. Can you imagine how many potential customers that can reach, One study published earlier this year estimated as many as 8.3 billion plastic straws pollute the world’s beaches.

But have no fear because ITP has the solution.  Metal and Glass and Silicone Straws are now all the rage. Straws that environmentally conscious businesses can buy with bonus points for spreading and keeping their brand top of mind to their potential customers for years to come, what they lack in disposability of paper and plastic they quadruple  the benefit of their great ability to be branded and remain with a consumer top of mind for years. But lets learn a little about the straw. 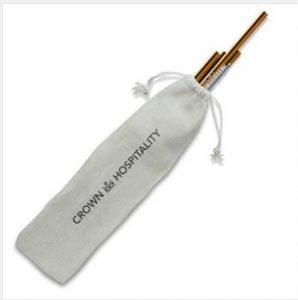 So, I wanted to get some history on Drinking Straws. I mean where did they come from?

According to National Geographic, or Wikipedia. . . . A man named Marvin Stone was the first to file a patent for a drinking straw, in 1888 . Legend in the name of The Smithsonian Institute  says Stone was drinking a mint julep on a hot summer day in 1880 when his piece of rye grass, then used as a straw, began to disintegrate. Stone, a paper cigarette holder manufacturer, decided he could make something better. He wrapped strips of paper around a pencil, glued them together, and soon had an early prototype of paper drinking straws. He patented his design in 1888, and by 1890, his factory Stone Industrial (today a part of Precision Products Group) was mass producing them.

In the 1930s straws gained the ability to bend. Watching his daughter struggle to easily reach her milkshake through a straight paper straw, inventor Joseph Friedman inserted a screw into the straw, wrapped floss around the screw’s grooves, and took out the screw. With indentations, the straw could easily bend without breaking. Friedman patented his invention and created the Flex-Straw Company to churn out his design.

In the decades that followed, the popular paper straw found its way into sodas and milkshakes across America.

Now it’s the 2019s and we will all have to get used to being more “in the present” about our environment and embrace the Metal Glass or Silcone Straws. Just make sure you brand them with something creative.  Contact In The Present to order Straws for your clients and keep your brand environmentally friendly.  gifts@inthepresent.com

About the Author: Pamela Grossman